Ray A. Lewis was born in Detroit, MI. Brought up in an extended family, Ray learned to cook, clean, wash, sew and whatever it took to be independent. Those survival skills proved to be advantageous to Ray, considering he spent most of his adult life living alone.
Ray began drinking at the age of 15 and not long afterward started to experiment with drugs. Being brought up in Detroit, it was not difficult for Ray to maintain access to extra-curricular personal vacations. He called those vacations “Going to another state”, meaning another state of mind. His drinking and drug use were merely recreational and was never in trouble with the law as a result of his street research. From his senior year in high school, to his Navy days and throughout early adulthood, Ray’s drinking continued to escalate. Alcohol addiction became a part of Ray’s young life and caused him to enter many treatment centers and into three hospitals at death’s door.
Surprisingly, during mid-life, Ray experienced a turnaround in his life. While many consider it personal strength, Ray insists that this was beyond his control. Whatever the case, since December, 1999, he has not had the need to pick up a drink or drug. Still, Ray contends that he is not immune to his addiction. Although he does not currently struggle with triggers, he is very well aware that should he dare to pick up even one drink, he will be transformed back to the old self, the addicted, and probable victim of death due to alcohol. The amazing things that allowed Ray to become and remain sober each day are discussed in his book. Just remember this, like Ray, anyone who has fallen prey to this deadly disease is always at risk. Like Ray, you must not forget that you are never more than “One Drink Away.”

ONE DRINK AWAY
Genre: Non-Fiction / Testimonial 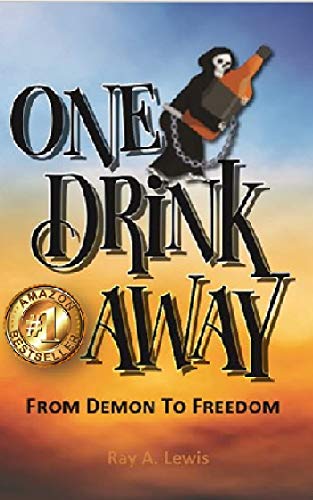 “This book is a life-changing experience. I have recovered, but a story like this may help others who want to go from demon to freedom.”
One Drink Away describes my tale of addiction to alcohol, my near death, and my road to recovery. I took my first taste at age thirteen. As time passed, alcohol became a daily refuge for me. While I was in college, I always seemed to have alcohol on hand.When I joined the Navy, my addiction was growing, but I refused to see it. After the Navy, I returned to my old job of driving a truck where I usually had a few drinks with my buddies before I pulled out onto the open road with a drink in my hand. This became the pattern of my life.I tried numerous treatment centers, found myself hospitalized more than once, but still I persisted in my daily drinking habits. I couldn’t live without it, but it was killing me. I actually wanted to die but didn’t have the courage to commit suicide, so I prayed to God to take me during my sleep and relieve me of my demons. This is the story of my journey through hell and back, and I give all the glory to my higher power that I call God. I want you to know that it really is possible to go from the demon to freedom. I hope this book will help you, or someone you know, climb from the pits of hell to find happiness, joy and freedom, possibly for the first time in life.